As this month comes to an end, always spread the message of the power of recovery!

There are plenty of ways to reduce or even end stigma. You could take part in a mental health run or walk,  join (and become an active member) a mental health organization, set up a presentation in school, church or some form of  a community center, join a mental health club in your school or even write a blog! Whichever form of advocacy you choose to take, it will be for the good cause of creating a safe and welcoming environment for all! 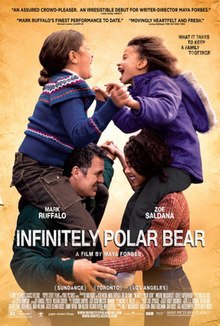 If you recall, I briefly talked about the film, Infinitely Polar Bear some time ago. The film came out this summer in a few selected cities. However, it will come out in theaters in the U.S. and possibly worldwide next year. I’ll be sure to remind you as the time approaches.

The movie is loosely based on Director Maya Forbes’ childhood. The movie takes place in the 1970’s when Cameron (played by Mark Ruffalo), who struggles with bipolar disorder has a mental breakdown one day and is sent to a mental hospital. Due to the event, Maggie (played by Zoe Saldana) moves herself and their daughters, Amelia and Faith, from their place in the country to small apartment in Cambridge. After enduring many hardships on her own, Maggie tries to find a way to support herself and her girls. So she enrolls and is accepted into Columbia University’s MBA program. Upon this triumph, she struggles to find a way to take care of her daughters while she’s attending her classes. So, she takes them to stay with their father and the love and acceptance that was needed within this family is rekindled once again, but this time it’s brighter than ever.

I think this would absolute make a great film for families who care for loved ones with mental illness to watch. Once again, look forward to viewing the film next year. I will, that’s for sure!

I know this question is going to come out random, but…do you the connection between this movie and Star Wars: The Force Awakens (another movie I look forward to watching this December)? J.J. Abrams! Yes, J.J. Abrams was one of the executive producers (including Mark Ruffalo) of Infinitely Polar Bear.

Ahh! I am so happy Drew Lynch made at least 2nd place for America’s Got Talent! 😆😆😆He’s so funny, inspiring, empowering, and cute too! And when I found out he has Black woman as his girlfriend, he definitely got my vote! 👍🏾 For those, who don’t know him and/or his story, Drew Lynch was playing a softball game and then disaster struck… a ball hit his throat, causing damage to his vocal cords which left him with a stutter. But did that stop him? Hell no! He pursed comedy and while making people laugh, he inspired people, especially people with disabilities to let them know that their disability does not define them.

I was really hoping he’d make first place! I voted him several times on the phone and on Google. But man! There were some pretty tough contestants this year! Drew Lynch was definitely my top favorite, but I also liked Paul Zerdin the Ventriloquist and Piff the Magic Dragon and his little dog, Mr. Piffles. Unfortunately, Piff didn’t make it to the top five. I was really hoping he would, so I could see him on the America’s Got Talent Tour when it came to Los Angeles. Damn! Let’s just hope I’ll have the money go to the show. But I am so happy that at least two of my favorites made it! 😆Did you know that there was a 1% difference between Paul Zerdin and Drew Lynch? That was a pretty tight race.

This year was a really good show with a lot of acts. I am really sad to see Howard Stern go! 😢He was so funny and honest! Aw it was a great year and I can’t wait to watch it next year! And I am soooooo happy Drew Lynch made it to the top 5! Whoo! 😗🎉🎊 I can’t believe I’m this excited for him! It’s not like I am the one who made it to the top 5.

If you like, you can take a look at a few of his clips from America’s Got Talent on the links below. Trust me you’ll have a good laugh!:

Drew Lynch-America’s Got Talent: Comedian Reveals The Truth About Dating